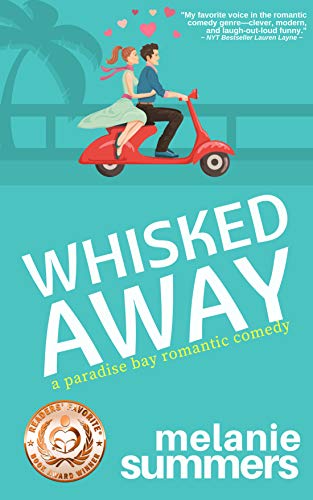 At twenty-seven years old, Emma Banks has big plans for her life. After graduating from the prestigious Culinary Institute of America, she’s ready to take her place as head chef at one of her family’s resort restaurants. But upon arrival at Paradise Bay, she’s shuffled off to the resort’s new private island getaway, where she’ll be stuck catering to the rich and shameless. Her first assignment is to serve Pierce Davenport, an infuriatingly arrogant writer with a palate that’s about as adventurous as a plain boiled potato.

Pierce Davenport is living every author’s dream—his critically-acclaimed Clash of Crowns books have been turned into one of the world’s most-watched television series. The only problem is, he has no idea how to end the epic fantasy tale. After two long years, his fans are turning on him, his publisher is panicking, and the network executives have announced they’re hiring a team of scriptwriters to finish (a.k.a. ruin) his legacy for him.

In dire need of solitude, he escapes to the Island of Eden for two distraction-free months so he can pull off the impossible—write an entire novel from start to finish. All he wants is peace and quiet, but when disaster strikes, he’s forced to rely on irritating-but-beautiful Emma to deliver more than just three meals a day.

Putting Pierce and Emma together is like combining orange juice and toothpaste. Will their differences be their ruin or will they be the secret ingredient to each other’s success?

For Once in My Life: An absolutely perfect laugh out loud romantic comedy

Big Sexy Love: The laugh out loud romantic comedy that everyone’s raving about!

Yours Truly: The perfect laugh out loud romantic comedy

The Boy in the Striped Pajamas