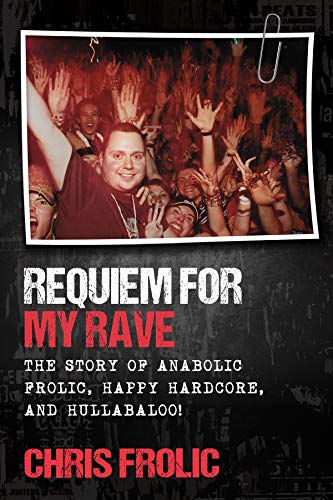 A secret generation’s story is told by the person at the heart of it all.

Drugs. Overdoses. Murder. A coroner’s inquest. Showdowns with the police, media, and government. Long before EDM, raves were the illicit dance parties of myth and legend. They happened mostly in secret, beneath the surface of society while everyone else was sleeping. Requiem for My Rave tells the story of best-selling DJ and world-class promoter Anabolic Frolic, who found himself at the leading edge of 1990s rave culture.

While Anabolic Frolic fought to build a force for good for his many dedicated fans, he found himself at the center of controversies he never could have imagined. Requiem for My Rave is an explosive memoir where Frolic shines a light on this generally misunderstood subculture. His powerful personal story is about the one person that found himself at the heart of everything, the steep price he paid, and the lessons that endured.

ABOUT THE AUTHOR: Chris Frolic, better known to fans around the world as Anabolic Frolic, was the DJ behind the ground breaking electronic music series Happy2bHardcore. It was the biggest selling electronic music compilation of the 1990s (Nielsen SoundScan). He was the promoter of one of the most celebrated and revered rave promotions of its time, Hullabaloo! He was also the host of the #1 dance streaming show of 2000, Happy Hour. Chris lives in Toronto, Canada.

Lord of the Flies