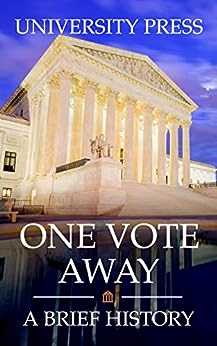 University Press returns with another short and captivating book – a brief history of the Supreme Court of the United States.

Following the American Revolutionary War, the United States of America had established itself as an independent nation, but the fledgling nation had many teething problems to deal with. The Constitutional Convention met in Philadelphia in May 1787 and, after months of debate and discussion, the new US Constitution was signed on September 17, 1787.

The Constitution had been written to establish a government that would have sufficient power to act on a national level but would not have so much authority that fundamental rights would be threatened. One way it did this was to separate the power of government into three branches – legislative, executive, and judicial – each with checks and balances on its powers, such that no one branch would be able to dominate the others.

Article III of the Constitution gave the judicial power of the United States to the federal courts, granting them the authority to interpret and apply the law in any given case.

The Supreme Court held, and continues to hold, a pivotal role in the constitutional government of the United States. It is the highest court in the land and, because it has the power of judicial review, it plays a crucial part in keeping each branch of government in check. It protects civil liberties and rights by quashing any laws which would violate the Constitution.

From history-making justices like Chief Justice John Marshall, to bare-knuckled political fights over presidential nominations, to landmark cases like Brown v Board of Education, this short book peels back the veil and provides a brief glimpse into the history and inner workings of the Supreme Court of the United States – a glimpse that you can read in about an hour.

One Vote Away: A Brief History of the Supreme Court of the United States

Presidents of War: The Epic Story, from 1807 to Modern Times

Off the Record: My Dream Job at the White House, How I Lost It, and What I Learned

Where Law Ends: Inside the Mueller Investigation

A Young People’s History of the United States: Columbus to the War on Terror (For Young People Series)

Witch Hunt: The Story of the Greatest Mass Delusion in American Political History

How to Destroy America in Three Easy Steps

The Decline and Rise of Democracy: A Global History from Antiquity to Today (The Princeton Economic History of the Western World)

She Had No Regrets: The Life of a Girl Who Knew Who She Was